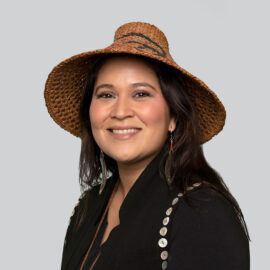 “Nathaniel really shines when he can engage in activities that play to his strengths and where he can be himself. For example, Nathaniel regularly attends the Sealaska Heritage Institute summer science, math, and basketball camp. The camp integrates math, science, basketball, and Tlingit language and culture.”

Barbara ‘Wáahlaal Gíidaak Blake is from Prince of Wales Island and now lives in Juneau, Alaska. She is Director of the Alaska Native Policy Center with First Alaskans Institute, where she promotes the self-determination of Alaska Native peoples through strengthening opportunities for Indigenous voices to be at the forefront of leading, solving, confronting, and advocating for Indigenous communities.

Barbara’s son, Nathaniel, has had an IEP and 504 plan for attention deficit hyperactivity disorder (ADHD) since second grade due to his difficulty sitting still and being quiet. Under his 504 plan, he can step out of class and move around as needed. Despite this, Nathaniel is regularly removed from the classroom. On one occasion, he was prevented from attending a special field trip for all sixth grade students because he spoke and fidgeted—a manifestation of ADHD—during an event. Nathaniel also has a potlatch voice, which is a ceremonial deep booming voice. Before his IEP and 504 plan, he was often reprimanded for speaking too loudly.

Barbara sees the school system’s lack of tolerance for Nathaniel’s ADHD as an affront to his Alaskan Native identity. Barbara has dedicated her life to uplifting native Alaskan culture and languages. Through the Fulfill the Promise campaign, she calls attention to the needs of native students with special needs who have suffered due to discrimination and lack of funding in the public education system. Fulfilling Congress’s promise to students to fund IDEA would provide additional personnel, training and services to support and celebrate students like Nathaniel.

Back to Home Page